One of the nation’s preeminent literary critics, Harold Bloom, died today at 89 (we’ve written about him here). One of his students, Ann Kjellberg, publisher of Book Post, remembers her time as a Yale undergraduate in the 1980s, when Harold Bloom taught a famous course with John Hollander called “Originality.”

“During office hours with me, Bloom once buried his head in his hands in despair that he was momentarily unable to remember the opening lines of Yeats’s ‘Per Amica Silentia Lunae.’ He blamed the fact that he had been briefly haunted by the death of his mother.”

Here are the lines, for others who do not know them by heart:

On the grey sand beside the shallow stream,
Under your old wind-beaten tower, where still
A lamp burns on above the open book
That Michael Robartes left, you walk in the moon,
And, though you have passed the best of life, still trace,
Enthralled by the unconquerable delusion,
Magical shapes.

She continued: “It meant so much to me, in those days when some sort of ‘science’ was supposed to direct the reading of literature, that he saw reading as a great human enterprise, an engagement of the passions, a heroic endeavor.”

A few Tweets below. We’ll be adding to the stack: 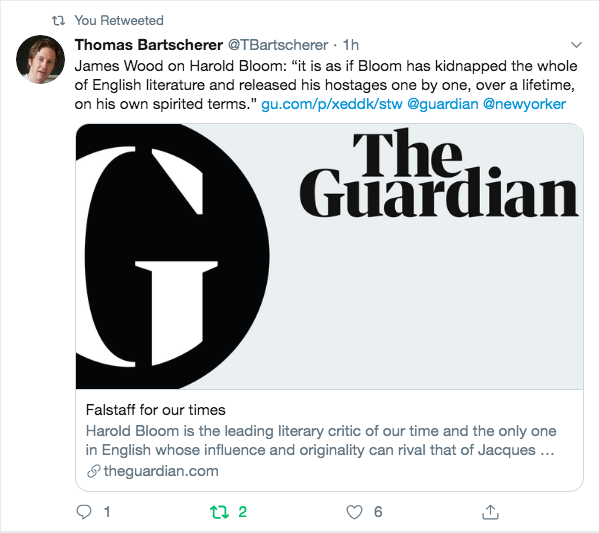 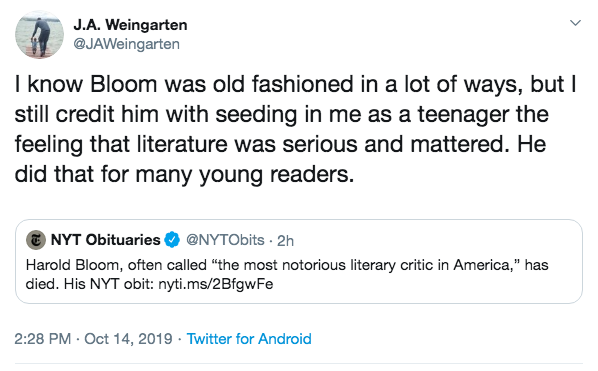 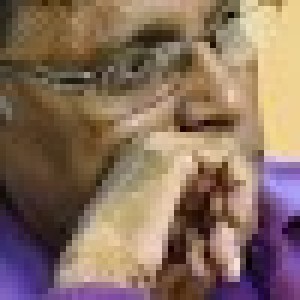